February saw members of the Executive out and about visiting a number of Mark Lodges.

On 4 February, V. W. Bro. John Ellis was part of the Full Team Visit to Henniker R.A.M. Lodge to celebrate its 75 year anniversary – and a smashing afternoon was had by all!

On Thursday 10 February, John was at MMH for the University of London Mark Lodge (covering for W. Bro. Howard Markham APGM) and then back again at MMH the next day for a meeting of Spirit of Rugby Mark Lodge, where he saw a superbly executed Advancement Ceremony. 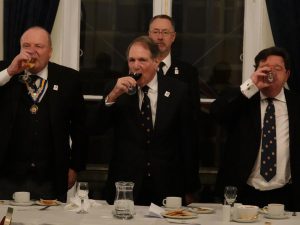 On Valentine’s Day, both V.W. Bro. John Ellis and W. Bro. Tim MacAndrews DepPGM were at Dramatic Mark Lodge for a FTV – where the Secretary W. Bro. Jonathan Munday (standing in for his son, whose wife had just given birth) Installed Bro. Norman Strong in a first-class ceremony. Norman is a strong supporter of the Grand Master’s Lodge of Instruction (GMLoI), and has a busy year ahead of him as at his next meeting he will be Advancing his son (while attempting a Silver Pin) and bringing his brother in as a joining member. It will go from being a good Lodge to a strong Lodge! And after that, he potentially has an old Masonic friend lined up to be Advanced.
Photos from the Dramatic Lodge visit can be seen here

On 19 February, W. Bro. Tim MacAndrews DepPGM went from “it’s all Greek to me” to “it’s all Turkish to me” when he, together with a Provincial delegation, attended our three Turkish Lodges where two of the three rituals were all conducted in Turkish. Despite not understanding a word of the Turkish ritual Tim says it certainly appeared to go very smoothly and clearly preparation had gone in by those Officers who played the leading roles. The morning began with W. Bro. Raymond Bodell installing W. Bro. Yucel Inan as the Worshipful Commander of Gallipoli Royal Ark Mariners Lodge – Yucel’s first Chair in any Order (with his next likely to be Mark followed in two years’ time by Craft). Following on there were Advancements in both Gallipoli and Namik Kemal (with a lunchtime carvery in between), and the day was crowned by the Lodges making a £1,000 pledge to the MBF towards their Patron collarettes. Photos of the Gallipoli meetings can be seen here. All of Tim’s delegation members stayed and enjoyed the whole day – this being the last such marathon as Namik Kemal will in future meet on separate dates to Gallipoli. Tim was also delighted to present an individual’s MBF Patron collarette to W. Bro. Andy Green at the Namik Kemal meeting. Photos of the Namik Kamal meeting can be seen here. 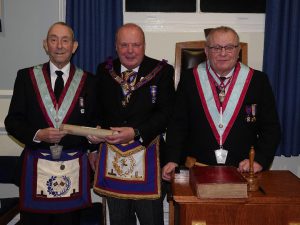 On 21 February, there was a FTV by the Provincial Grand Master to Scots Lodge where he is an honorary member and John Ellis is a member. There was a Burns Supper, and the PGM addressed the haggis. Next door, meanwhile, Tim MacAndrews was attending Prudence and Verity Lodge, primarily to present a 50th certificate to W. Bro. Stewart Clyne on behalf of the Provincial Grand Master. Stewart has had a full and interesting Masonic path: he joined Prudence and Verity in 1970 just five years after being initiated into a Craft lodge – the impetus being that he was a stockbroker and at that time Prudence and Verity only accepted stockbrokers or their staff. He went on to become a Founder of a Mark Lodge (Table Fellowship) in Surrey, and attained Grand Rank – PGStB – in 1981. He is still active in both Lodges, and at yesterday’s Prudence and Verity meeting was invested as the Lodge ADC. The presentation was preceded by an excellent Installation ceremony conducted by W. Bro. Derek Bell who installed W. Bro. Chris Probyn as his successor. Photos from the Prudence and Verity meeting can be seen here. 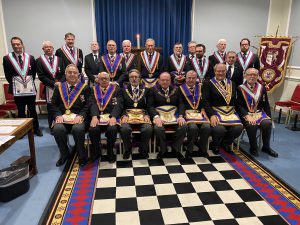 On 22 February, Tim MacAndrews was back at MMH for a meeting of Old Kent TI Lodge. Although a number of their key Officers were missing, everything went according to the summons and there was plenty of support by a solid Provincial delegation of eight. An excellent rendition of the Mark Lecture was given by Bro. Alan Smith, and Bro. Noel O’Sullivan was elected as the next WM. There were a number of Advancement and Elevation candidates outstanding and overall this Lodge is in great stead going forwards.

26 February saw the Consecration of Khalsa R.A.M Lodge, by the PGM and members of his Executive. You can read more about this here.

Monday 28 February was another gathering of the Executive – this time at London Installed Commanders and London Installed Mark Masters Lodges. John Ellis says “If you’re not already a member and you qualify, you really ought to consider joining as a smashing afternoon was had by all, and R. W. Bro. Tom Quinn announced the name of the next APGM who will be taking over from V. W. Bro. David Lucas when he retires in July [Ed: see here for more information about this announcement]. So don’t forget to put 14 July in your diary and come along to the AGM at Freemasons’ Hall to witness this memorable occasion.”